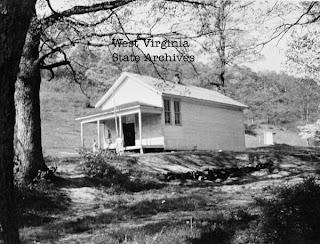 Streeter in the early 1900's was very different from what it looks like today. There was a saw mill*, and general store/ post office (operated by John Wesley Basham and wife Lucy). The Rhoda Ann Memorial Missionary Baptist Church was built in the mid 1900's in honor of Rhoda Ann Elizabeth Cooper Pack (an aunt to John Basham). The deed to the church was owned by many Packs and Harveys.
A narrow grade train track once reached into Streeter for hauling timber. The track was financed by Princeton Bank & Trust. The track was later washed out by a flood.
Guy Basham worked in the mill (bloggers great uncle). According to Macy Pack Basham (his wife), Guy would make a gong of sorts out of a saw blade and bang it during wedding processions.
A school house (pictured above) once rested near the land now occupied by the church (via WV archives online).
*Some sources say it was a flour mill.
Posted by Brian.... at 12:55 PM