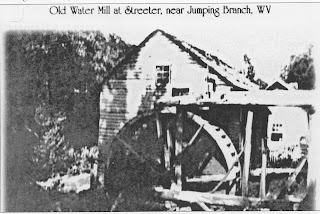 The Mill was built by John Pack around 1845. After his death in 1890, it passed down to his son Samuel, then to his grandson William Alexander Pack. The mill ceased operation in 1935.
Born in 1809, John R. Pack owned approximately 40,000 acres of land in Summers County. Many of his descendants inherited his land in and around Streeter (John Wesley Basham, his grandson, inherited property on White Oak Mountain from him).
--Sources: photo via "Summers County In Vintage Postcards", copyright 2005; Interiew with Jack Pack, May 2010.
Posted by Brian.... at 11:57 AM