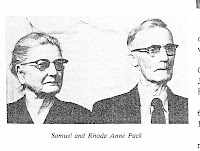 Rhoda Anne Cooper, born 1851, was the daughter of Alexander and Mary Anne Farmer Cooper. She married Samuel Pack (owner of Pack's Mill at Streeter) and they lived in the Streeter area. The following is taken from History of Summers County (published by the Summers County Historical Society): "Samuel and Rhoda Anne Pack were known by word and deed as true and loyal Christians. The church at Streeter was named in honor of Rhoda Anne Pack. Samuel Pack was a loyal and patriotic citizen and a member of the Primitive Baptist Church. His death on July 12, 1895 was considered a great loss to the community. Rhoda Anne died April 11, 1937 at the age of 86. They were the parents of 11 children: Lucy married John L. Wills and J. Wesley Basham*, George W. Married Louie Vest, Andrew married Cleopatra Harvey, William married Lucinda Johnson, Alfred Married Virginia West and Mary Cooper, Laura married John Lilly, Amanda married Grover Adkins, Jebediah Preston never married, Samuel married Elizabeth Dunbar, Cecil married Willie Harvey, and Effie Fay never married."
*Samuel Pack was father to Lucy and uncle to her second husband J. Wesley Basham (both were grandchildren of John Pack).
--(note: although the photo is titled 'Samuel and Rhoda Ann' in the book, I am pretty sure this was not her husband Samuel. He died around the age of 50 and the fashions they are wearing are not 1890's fashion- the era he died).
Posted by Brian.... at 2:52 PM