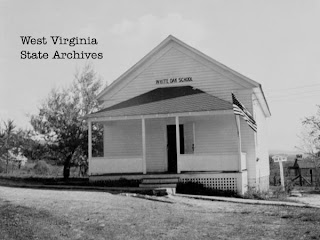 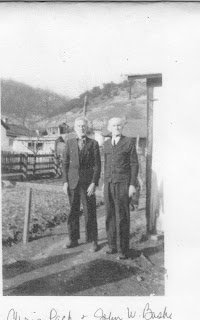 John Basham (pictured on the right) was born in Summers County. I was told he attended Concord College (I am still trying to authenticate this). He was a teacher as well as a farmer. His first marriage was to Ida Jane Lilly (or 'Violet'). They were distantly related (both shared Robert Lilly and Mary Francis Moody as Great Great Grandparents). His second marriage was to Lucy Pack Wills (they were both widowers). Lucy and John were first cousins (John Pack who built Pack's Mill was a grandfather to both). As a brief anecdote, I spoke with Macy (Pack) Basham "Aunt Macy" (married to John's son Guy) in 2010 (she is now 98 years old). According to her, John "Grandpaw Basham" was a "good man...he loved to read and farm. If there wasn't sweet milk or cream to use for his meal he would use buttermilk- he never complained or asked specifically what he wanted to eat". He taught school in a one room school house on White Oak Mountain. He was also a farmer and a postmaster of Streeter, WV. When he was a baby(according to Macy) his mother would take him with her to the spring (creek) to fetch water. On one trip they were chased by a panther. His father, Alexander, died in the Civil War in Richmond when John was a baby. Years later, he and his son Ray traveled to Richmond but they could not find the tomb. John inherited the land on White Oak Mountain from his father Alexander Basham who acquired much of the land from his father-in-law John Pack.
The general store and post office were originally owned and operated by Lucy. After her marriage to John they shared the responsibility. Then about 1923 he inherited these businesses after her death (most of his income came from this). John died in 1941 and was buried at the Basham Cemetery (along with his 1st wife). Lucy is buried with her first husband (along with several children from both marriages) at the Pack/Harvey cemetery on Streeter Road.
*Right click on photo for better view.
Sources: Macy Basham, Wayne Harvey of Hinton, and Jack Pack of Streeter.
Posted by Brian.... at 7:28 PM