Keep in mind that the command structure changed over the course of the war.  At the beginning of the Seven Days Battles of Richmond in 1862, the command was the following (in descending order of rank):

Maj. General Ambrose P. Hill - his light division (which included men from the 60th Va. Infantry - among many other divisions - totaled roughly 14,000 men at the time of the Seven Days Battles).

White Ryan, Cpt. of Company I,  aka "Mercer Mountain Rangers"

For a number of years I've tried to track down where Alexander Basham (John Wesley Basham's father) was buried in Richmond.  As a review, Alexander Basham served in the 60th Virginia Regiment (Co.I) and died at the Seven Days Battles of Richmond in 1862.  I had two mysteries: (1) the location of his burial, and (2) the specific Battle of the Seven Days Battles he was wounded in.

I contacted historian Bob Krick in Richmond and he was able to do some detective work with some materials in Richmond.  According to Bob, Alexander Basham is buried at the Oakwood Cemetery in Section C.  Unfortunately, we do not know exactly where in Section C he is buried.  The graves are unmarked.  They are numbered, but the corresponding names do not exist for many soldiers because over time the ladies who once maintained Oakwood could not read progressively fading markers, and some markers were lost, broken, or stolen.  A 2nd list resurfaced about 15 years ago.  This list was maintained by the caretaker of Oakwood Cemetery, John Redford.  It's because of this list that we know for sure that Alexander Basham is buried at Oakwood Cemetery and in Section C (but not the specific plot).

As for the battle he was wounded in, Bob had the following to say (I've included the full correspondence):


"Attached is the scan of the appropriate page from the Oakwood Cemetery superintendent's burial list.  That list only exists for 1861-62, so you are fortunate in that regard. The original list was discovered in the archives at the Museum of the Confederacy in Richmond a few years ago.  Basham is about two-thirds of the way down the list, correct in every particular except it identifies his regiment as 6th Virginia instead of 60th Virginia.  Those sorts of errors are typical, even routine, and it should not bother you.

I am happy to report that I finally found what I thought I remembered:  a note in my files about a 60th Virginia casualty list.  It was published in the Richmond Enquirer on July 7, 1862, page one.  Happily for you, it breaks down the regimental casualties by battle:  June 26 (Mechanicsville or Beaver Dam Creek); June 27 (Gaines's Mill); and June 30 (Frayser's Farm or Glendale).  This is on microfilm, and I do not have the ability here in my office to make a copy for you from film.

It shows Alex Basham wounded "slightly in thigh" on June 30 at Frayser's Farm.  So the inference is that he served in, and survived, the big charges at Mechanicsville and Gaines's Mill.  You can guess along with me on how a "slight" thigh wound on June 30 became a fatal wound by the second week of July.  Gangrene is one possibility, or some version of infection.  Or, he could have been weakened by the wound and contracted something else.
The 60th Virginia's charge at Frayser's Farm is a very famous episode.  The 60th and a sister regiment charged a battery of Union cannon and actually fought for possession of it using bayonets, fists, and clubbed muskets.  The ground where that happened is now part of our national park, only recently preserved by the Civil War Trust and turned over to us.  It is very, very different today.  It is wooded, but was open in 1862.  And it is unmarked today--no signs, no trails, etc. But in future years it slowly will become better looking, and better for visiting.

As a bonus, see the second attachment, which is a very well known piece of combat art depicting the 60th Virginia and its sister regiment the 55th Virginia charging that battery at Frayser's Farm.  The artist served in that brigade, which makes the sketch that much better." 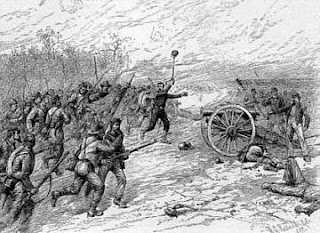 What I find most interesting is that Vernon Pack found his grave in Indiana.

The Findagrave website has photos of his tombstone, and someone posted his last will and testament on the site.
Click the link:
http://www.findagrave.com/cgi-bin/fg.cgi?page=gs&

Again, I have to apologize for a long absence.  I have a new teaching job with a long drive.

On January, 25th, 2015 my Aunt Lee passed away in Florida.  She was the oldest daughter of Ed and Lilly (nee Basham) Halstead.  Her biological father was Claude Hurt (Lilly's first husband).

Although she was technically my mother's half sister, she was as close as any sister could be to mother.  Likewise, I admired my aunt very much.

She owned Del Mar beauty shop in Beckley, WV for many years.  During WWII she worked on aircraft construction in Baltimore, Maryland.  Two of those planes were the Martin JRM Mars and the Martin B-26 Marauder.

She was a self-educated business woman and became very successful.  This was during the 50's and 60's when many women had to depend on their husbands for income.  She told me when I was a college student to make sure I took business courses, which I did and this knowledge served me very well.

She was one of the most inspirational figures in our family.  I will never forget the historical books, baked cakes and candies that she would send me during Christmas.  We also would visit her and my uncle at their home in Virginia.

Vernon:  I didn't recall having a turkey, but we would have meat of some kind.  Dad would kill a rabbit or we would have pork.  Turkey was rarely seen.

Me: Wild turkey were rare?

Vernon: Yes.  The hunters had just about eliminated all the big game around the Streeter area.  A friend recalled the only time he saw a deer it was dead on someone's fender - killed by a hunter and put on the fender of the automobile.

[Thanksgiving] we maybe had a rabbit or some pork, sweet potatoes were of course plentiful, regular potatoes, brown beans (dad loved them), and cornbread.

We would have a pig or hog butchered on that day and the ladies and their husbands would come and some members of the neighborhood would come and help butcher - it was an all day and sometimes all night affair.  Butchering day was Thanksgiving Day.  Salt was rubbed in the meat to help preserve it - we didn't have electricity.  Usually the hogs were 300 to 400 lbs, so it was a chore to get them prepared.  The people who helped were given some of the pork for the benefit of helping.  Not everyone had pigs, but dad often did.

Thanksgiving wasn't a day of leisure; it was a day of work.  You had a heated water barrel - boiling and hot - you stuck the hog down inside the barrel a number of times to get the hair softened to scrap off.

Me:  What about pies, desserts?

Me: Did your mom make the pumpkin from can?

Vernon: she grew her own pumpkins and selected the best from the field.  She would then cook it down.  I didn't like pumpkin pie because I had to smell it being prepared.  I liked the cherry, huckleberry, and blackberry cobblers.

[On activities]:  My uncle Alex Pack [William Alexander Pack] was invited.  He would stick the knife in at an angle [when slaughtering the pig].  The men would bet he would punch the heart - normally he would puncture the heart.  He knew what he was doing.

They [the men] would chew tobacco and have spitting contests.  They also played Mumble (or Mumbley) Peg.  You open a knife partially, place a piece of wood on the floor, and cover your sight of it with one hand and see if you could stick the wood with the knife tip.  It would stick if you knew what you were doing.  The men bet 5 to 20 cents.

Fall is probably my favorite season.  Some of my favorite foods come in season: pumpkin, apples, squash, warm stews and soups.

One of my fondest memories is going to the Streeter area with Mawmaw and Pawpaw Halstead.  Pawpaw made a crate that tied to the front of his Jeep which he used to put his beagle in.  You might think, "that's odd", but it seemed so normal at the time -the radiator kept his beagle warm.  We would all take KFC and park along the road, eat and admire the foliage.

The following was posted courtesy of a follower of the blog.  The information (I believe) was taken from the Register Herald newspaper:


Birth: Feb. 19, 1926
StreeterSummers CountyWest Virginia, USADeath: Jul. 9, 2013StreeterSummers CountyWest Virginia, USACharles Jackson "Jack" Pack, age 87, went to be with the Lord on July 9, 2013 at 4:21 AM at his home in Streeter, WV. Born on February 19, 1926 at Streeter, WV he was the son of the late Pearl B. and Ruby V. Pack. Jack was a member of the Bluestone View Primitive Baptist Church on Ellison Ridge, WV. He retired as a self-employed timberman after working many years for the Basham Brothers Co. He continued to work in gardening and farming and was an avid hunter. Jack was a WWII veteran having served in the 7th fleet of the United States Navy. Jack was preceded in death by his loving wife of 51 years, Annabelle Wooten Pack; an infant son, Charles Dale Pack; a daughter, Sharon Elaine Pack; two brothers, Curtis Pack and James Pack and a sister, Alice Francise Okes. Those survivors left to cherish his memory include his daughter, Terisa B. Pack of Streeter, WV; sons, Tommy and wife Janet of Daniels, WV; Tony and wife, Connie of Daniels, WV and Herman and wife, Karen of Streeter, WV; thirteen grandchildren; five great grandchildren; a special cousin, Missy Price and special neighbor, D.J. Pettry. The family is grateful for the ceaseless loving care extended to him, especially in his last weeks here on earth, by his son and daughter-in-law, Herman and Karen Pack and grandson, Ernest (Timmy) McGraw II. The family would also like to thank Hospice of Southern West Virginia for their support and compassion. Funeral services will be held at Rhoda Ann Missionary Baptist Church at Streeter, WV, on Friday, July 12, 2013 at 2:00 PM. Viewing will be Thursday, July 11, 2013 at Jack's home in Streeter from 6:00- 9:00 PM. Services will be conducted by Elder Tony Pack and Elder Tommy Pack. Burial will follow in the Pack Family Cemetery on Panther Knob, WV. Grandsons and D.J. Pettry will serve as pallbearers. Serving as honorary pallbearers will be Billy Pettry and Dale Pettry. Family links: Parents:Pearl Bryan Pack (1900 - 1988)Ruby Violet Cooper Pack (1907 - 1991)Spouse:Anna Belle Wooten Pack (1927 - 1998)Burial:Curtis Pack Cemetery StreeterSummers CountyWest Virginia, USAMaintained by: lesa seberleOriginally Created by: Walter H. Pack FamilyRecord added: Jul 09, 2013 Find A Grave Memorial# 113575468
Posted by Brian.... at 1:27 PM No comments: