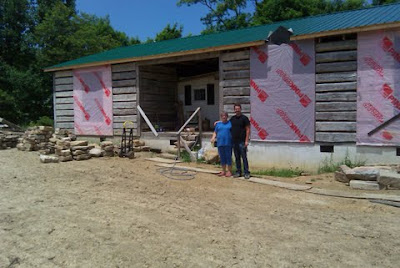 John "Snakebite" Lilly's home, built about 1835, is being restored. John Lilly, along with his family, owned thousands of acres in and around the Ellison Ridge area. His home was, many years later, converted into a barn.
Today I met the new owners: Tinker Kales and his wife Carol. They are painstakingly restoring the home to its original condition. It is amazing what they are doing- without any help!
Carol (pictured with me), the wife, I am distantly related to. She is also a Great Great Great Grandchild to John.
Posted by Brian.... at 4:01 PM No comments:

The following is taken from notes by Charles Hatcher (Ellison Ridge borders Streeter area to the south):
"James Ellison and Matthew Farley were cribbing corn on Crump's Bottom, October 19, 1780, when they were attacked by seven Shawnee Indians. Farley swam across New River and escaped, but Ellison was wounded so badly in the shoulder that he was unable to swim. He did, however, run up the stream, but was captured later within a mile of Fort Field. His captors carried him about 15 miles up the Bluestone and Paint Creek Indian Trail which ran along a spur of Flat Top Mountains. It was this spur that was afterwards known as Ellison Ridge. The Indians arrived on the ridge with their prisoner just after dark. They camped on the east sid e of the ridge, across from the present forks where one road leads to Streeter and the other to Flat Top, both in West Virginia. The site of the camp is on the land formerly owned by John E.C.L. Hatcher, the father of this compiler. The Indians bound Ellison's hands and feet, then removed his moccasins for purposes of torture. He finally worked the thong loose from around his ankles and escaped later in the night with his hands still bound behind him. He hid among some cliffs about 500 feet away.

The Indians searched the cliffs and surroundings, but over looked one small space, where Ellison was hiding under the side of a cliff. They passed on, still continuing their search. On a sharp stone Ellison sawed the thong loose from around his hands and returned to Farley's Fort on Crump's Bottom.
[He] revisited the place where he escaped from the Indians several times during the lifetime of William (Dr. Bill) and Frances Lilly, the grandparents of this compiler. The place where Ellison escaped from the Indians in 1780 was on the land later owned by Dr. Bill Lilly and John E.C.L. Hatcher."

Ellison Ridge was used by many Indian tribes for hunting purposes. The ridge was named in honor of James. It remained untamed until 1833 when Robert Lilly, John Lilly (a direct ancestor to my family via Lillie Basham's mother Ida Jane Lilly. He is a great grandfather to Lillie) , Josiah Lilly, and Jonathan Lilly purchased from Alfred Beckley 3000 acres of land, known as Lilly's Panther Knob Survey.
Note: James Ellison's descendant Mary Eleanor Ellison is an ancestor to my family (Basham side). Also, Nancy, a descendant, married a Halstead. Genealogists are not able to verify due to lack of sources, but they believe that Nancy probably married a grandson of James Halstead (forefather to my cousins who descend from Ed Halstead)
Sources: Dee Wheaton, "James Halstead: Pioneer of Indian Creek";
Charles Hatcher, "Historical Genealogy of the Basham, Ellison, Hatcher, Lilly, Meadows, Pack, Walker, and other Families"
Posted by Brian.... at 7:19 PM 2 comments: 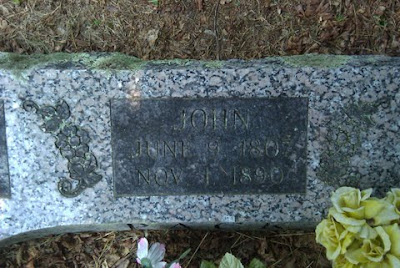 The John R. Pack/ William Vest Cemetery is located on Melvin Underwood Rd. Off Streeter Road. It is easily accessible.
There are a number of Bashams, Harveys, Vests, Wills, Packs, and Pettrys buried there. John R. Pack, forefather to many Packs living in Summers Co. is interred beside both his wives- Elizabeth Dell Harvey and Elizabeth Rollyson.
Lucy Pack Wills Basham is buried here along with Children from both her marriages. She was interred along side her first husband.
Supposedly Mary Jane Pack (wife to Alexander Basham and Wilson Harvey) is buried there, but I could not identify her tombstone. There are a few illegible ones.
It is a very peaceful cemetery with a bench or two to sit down on.
Posted by Brian.... at 3:33 PM 9 comments: 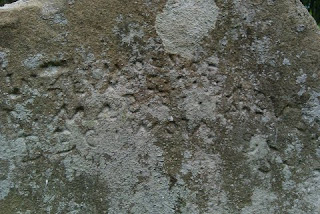 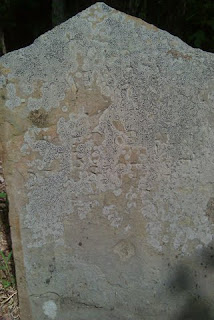 Cemeteries. There are many in the Jumping Branch/Streeter/Nimitz area. Basically, where there was ever a farm there was a cemetery. For instance, there are roughly 10+ cemeteries along Ellison Ridge Road... and counting!
In the ensuing posts I am going to feature info I have gathered regarding cemeteries. There are some points to consider. First, some burial plots were moved by the U.S. Army Corp of Engineers during the construction of Blue Stone Dam in the 1940's. The USACOE was meticulous; however, they could not read some tombstones. When visiting the major cemeteries I came across many of their little green markers with no names. Where people speculate that our ancestors are interred I will make an indication.
As a starting point, I'll address the cemeteries on Panther Knob (near Streeter). There are two (that I know of). One contains the remains of Pearl and Ruby Pack (it's often referred to as the Pack cemetery on Panther's knob). Pearl and Ruby were parents of Jack and Jim Pack (cousins to my family through Mary Jane Pack, mother to John Wesley Basham). It is located roughly 4-5 miles along Streeter Road on Panther Knob in a field south of the road.
The other site (tombs pictured) is the Basham plot. This contains the remains of William Blane Basham (note to my family: William Blane was a cousin to John Wesley Basham- John's father Alexander and William's mother Rhoda were brother and sister). Some of the headstones are not legible, or barely legible.
The following are buried there (according to online sources):
William Blane Basham (1828-1914)
his son, Isaac Edmond Basham (1869-1912)
sister: Malinda Pack, who married Vandalia Harvey (b: 1836)
Annie Belle Basham, I believe a child of Malinda's (1894-1915)
Ada Pearl Hylton, a grand daughter of William Blane (b: 1902)
sister: Rebecca Ferguson (born 1844)
Some graves are legible at this point, and some remain unknown for now.
Posted by Brian.... at 8:30 AM 1 comment:

White Oak School Is Where?!

I had a very interesting conversation with my uncle Jimmy Halstead this week.
He told me that the White Oak School (pictured a few posts below) was indeed the school John Wesley Basham taught in. Many years later Finley Basham (John Wesley Basham's son by 2nd wife Lucy Pack) told his wife he was taught in the school house and had a sentimental attachment to it.
According to Jim, Finley's wife had the school removed and transported to behind their home!
Posted by Brian.... at 1:38 PM No comments:

I have been out of commission due to computer problems. All is well now and I have lots more to share...
I spoke with Jack Pack a few weeks ago and I asked him how Streeter was named. According to Jack, Streeter was originally named after Vandalia Harvey (as I reported in an earlier post). Later the village was named after a man with the last name Streeter from New York someone knew. He said he did not know who this man was.
This certainly helps me out and when I uncover more information I will pass it along.
As soon as I get my scanner properly installed on my new computer I will upload some more photos.
Posted by Brian.... at 1:27 PM 2 comments: