The following is taken from Beckley Post Herald (Greenbrier Valley News Section), 1950
By Teva Meadows:
"Following Sunday school and church services conducted by the pastor, Rev.
W. E. Harvey, of Maxwell Hill, an all-day service during which a basket lunch
was enjoyed, was held at the newly constructed church at Streeter last Sunday.
The Church has been named the Rhoda Ann Memorial Missionary Baptist church,
and the all day meeting was the first homecoming to be held there.
The Rev. Mr. Harvey related that he first came to Streeter to hold services on
July 4, 1949 and when he arrived there only one man was waiting to hear him.
Within the next thirty minutes a crowd of about 50 persons had gathered.
It was then that he first felt the need of a church in that vicinity. For many years
previous the people in the neighborhood had been having services in a one room
school.
Following the services, during which Rev. Harvey felt the need for a church,
the patrons of the community set about planning the church.
The new church is located on a lot where the old grist or water mill stood and which
was owned by the late Samuel Pack. Mr. Pack died in 1893 and for the next
47 years his widow, Rhoda Ann, lived on the property and was a faithful member
where services were held in the schoolhouse. The new church was named
for her.
During the past half century when the little school also served as a church, there
have been several pastors. The first was Jerry L. Meador, who served for a number
of years. The first clerk of the church was Micheal Adkins, an 84-year-old member
who is living still. Bum Pack, a retired school teacher, who taught in the little
school for several years, recalled vividly the baptismal service in 1906 when he himself
was baptized.
The Rev. Christopher Pack, now of Rainelle, and who is now 84-years old, was
the next pastor of the church. He was born and reared close to the location
of the church and served in the capacity of pastor several years.
The Rev. Richard Lilly, of Sand Knob, was the next pastor, he was replaced by
the present pastor, Rev. Harvey. The superintendent of the Sunday School is
Mason Lilly, a son of Mr. and Mrs. Jackson Lilly, lifelong residents of community.
The Sunday school was organized in January of this year.
During the Sunday afternoon service special music was furnished by different
church groups and guest speakers were also present. Those who spoke
or sang during the afternoon included: Rev. Homer Lilly, of Rock Castle
association; Rev. Malcolm Lilly, of Dunne and the Dunne Choir; Rev. Christopher
Pack of Rainelle: music by the White Twins, Orville and Norville of Nimitz."
Posted by Brian.... at 1:21 PM No comments:

I would like to thank Howard Vest for all his help the other day!
To my family: Sarah "Sally" Swope married Joshua Harvey. She is mother to Elizabeth Bell Harvey who married John Pack, grandmother to Mary Jane Pack who married Alexander Basham, and great grandmother to John Wesley Basham.
Cemetery is located off Rte. 19 beyond Ghent. Once the road becomes parallel with I77 you will see an unmarked, steep dirt road to your right.
"In Memory of Sally Harvey who died Feb. 21, 1862 and was born 1787"
Posted by Brian.... at 4:37 AM 2 comments:

Cemeteries on Hatcher's Bench Rd. (16/2), Wallis Property sites
The following information may be helpful to anyone researching their family genealogy from Summers Co. I did not notate all the tombs. I may do that later.
Hatcher's Bench Road (located on hill above white building):
Toye Richmond 1916-1993
Zella Houchins 1896
J. Willis Lilly
Randy Yancey 1960-93
Samuel Bragg 1890-80
Carlos Ray Basham
Albert Preston Basham (son of Aiden Basham)
Cora Cook Basham
Carl Dean Basham
Boyd Cook 1924-1973
Joe Cook
Floyd Cook
Dot and Don Frye
Rollins
Meadows 1876-1987
Children of John A. Lilly (James Lilly)
Wallis Property (1): Go about a mile up the mountain on Hatchers Bench, pass the Wallis home. Once you pass the grain silo, you will see a gentle hill to your left. There is an untended cemetery about 500 ft from the road:
Joseph Lilly 1888-1951
John F Lilly 1849-1935
Virginia Lilly 1850-1919
George Johnston 1874-1905
Jeanette and James Johnston
Wallis Property (2): Continue out the dirt road, passing through several gates. You come to an open field. To the right you will see a small cluster of trees in the middle of the hay field under an old locus and wild cherry:
Virginia Harvey (wife of D.H. Harvey) 1889-1904
Jonathan Harvey 1841-1914 (a grandson of Joshua Harvey)
J. Calvin Harvey 1818-1914 (a brother to Elizabeth Bell Harvey)
Nannie Ann Lilly 1876-1953
Mildred Lilly
William Stonewall Jackson Lilly
Mason Lilly is probably buried here however at the time the weeds made it difficult to identify all.
Posted by Brian.... at 4:07 AM 6 comments: 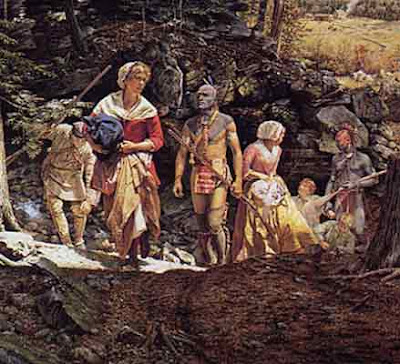 The following is taken from Charles Silas Hatcher's "Historic Genealogy...":
The Bluestone and Paint Creek Indian Trail
The Indian trail crossed Ellison Ridge (just south of Streeter) through the farms later owned by J.J. Bragg, Lacey Wills, John E.C.L. Hatcher, Reverend Allen McKinney, Posey Wood, Dr. Ballard C. Mann, and Luther W. Okes. This trail is mentioned in some of the early deeds of Ellison Ridge recorded in Giles County, Virginia (Summers Co. was once a part of Giles County VA).
This trail passed down the New River via the mouth of Indian Creek and then along the west side of New River to the mouth of Big Bluestone River. Here the trail left New River, going up Big Bluestone to the mouth of Little Bluestone River, up little Bluestone to the mouth of Suck Creek, up Suck Creek and thence across Ellison Ridge and the Flat Top Mountains. It went on through the site of present city of Beckley on to the head of Paint Creek and down the Paint to the Kanawha River.
Two other trails came into the main route on top of Ellison Ridge. One came from New River over the Tallery Mountain, crossing Big Bluestone River and going up Ellison Ridge to the main trail. The other trail crossed Little Bluestone River near the Fall Rock and went up the ridge by way of Panther Knob to join the main trail.
Posted by Brian.... at 4:35 PM No comments: