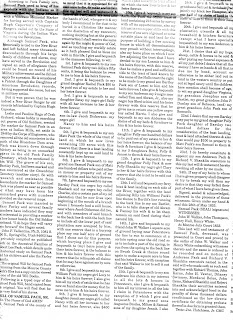 The following article was published in the Sept. 6, 2011 edition of The Hinton News, article by Pauline Haga, "Samuel Pack Indian Fighter".
Note: In the article, Haga states that there is no record of Pack's military achievement during the Revolutionary War and that he was made an honorary Patriot by the DAR. There is a record that he provided equipment and/or supplies for American Soldiers (this via the VA Archive).
Sorry for the poor quality of the scan. It's a long article. Click on the image to enlarge.
Posted by Brian.... at 11:37 PM