This is an item that is a part of a collection that Vernon Pack recently sent to me.  He deserves many thanks for including these materials.  The rest I am uploading soon into the photo and document archive on the blog (look for the tabs on the home page).

The letter, written June 24, 1888, was mailed from Vandalia, WV.  Vandalia was the name for Streeter before the name change.  Jonathan Calvin Harvey communicates the very hot temperatures, recent severe storm, and resulting crop damage to his father Isaac (coincidentally, there is a photo of both men in the archive via Vernon). 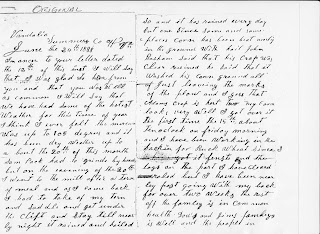 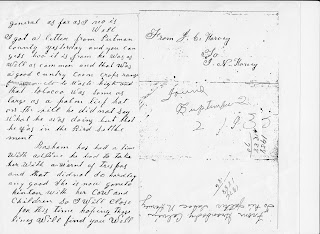 (my notes are in brackets and there are footnotes):

In ancer [answer] to your letter dated the 12th of this inst [instance] I will Say That I was glad to hear from you and that you was well as common. I will Say that we have had some of the hotest weather for this time of year I think I ever felt. The mercury was up to 105 degrees and it has been dry weather up to a bout the 20th of this month. Sam Pack* had to grinde by hand**but on the evening of the 20th I went to the mill after a turn of meal and as I came back I had to take of my turn and Saddle and get under the clift and Stay Till near by night.  It rained and hailed So and it has rained every day but once Since Same and Some places corn has been beat nearly in the ground with hail.  John Basham+ Said that his crop was clear ruined he said that it washed his corn ground all of just leaving the marks of the plow and I guess that Adam's++ crop is hurt too. My corn looks very well I got over it the first time the 15th about ten o'clock on friday morning and I have been working in the backin [a back corner]] for Buck Wheat Since I got it fenste [fenced] and the logs on the part I have clear roled [rolled] but I have been near by past going with my back for over two weeks.  The rest off [of] the family is in common health. Dow's^and Jim's^^ famileys is well and the people in general as far as I no [know] is well.

I got a letter from Putman [Putnam] yesterday and you can gess hoo [guess who] it is from he was as well as common and that was a good country crops range... it to waste [waist] high and that tobacco was same as large as a palm lief [leaf] hat on the hill.  he did not say what he was doing but that he was in the Bird Settlement [Raleigh County community that no longer exists].


Basham+ has had a time with adline he had to take her with a war[a]nt of trespas and that did not do hardley any good.  She is now gone to hinton with her cow and children So I will close for this time hoping those lines will find you well.

From J.C. Harvey To I.N. Harvey


*Samuel Pack, owner and operator of Streeter Mill.
** The water was not high enough for the water wheel to turn.
+ John Wesley Basham, my great grandfather.
++ V. Pack is not sure who he refers to here.
^ Lorenzo Dow Harvey, brother of Joshua Calvin.
^^James Harvey, Joshua Calvin's brother.