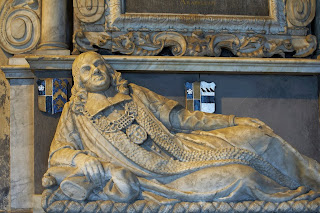 Also see my post dated 10/12/2011 for an update
Sources: Notes and Queries: Literary Men, Artists, Aniqueries, Etc. Vol VII, 1853, by
George Bell of Fleet Street, London; The Last Years of the Protectorate by Charles Harding, Firth, 1909; Wikipedia: "Sir Christopher Packe", Lilly Family History.
First, let me address the information provided by the Lilly Family History Book (as well as the Silas Hatcher writings) about the Pack family. According to this, and other sources, the Packs descend from "Alderman Pack" who was a member of the "Long Parliament during Cromwell's time". Also, there is a story that Jennie Pack, a daughter of Samuel Pack and Mary Farley, was married to President Hayes. I will address the Alderman Pack connection, but first let's address the connection to Pres. Hayes.
First Lady Lucy Webb Hayes was the daughter of Maria Cook Webb and Dr. Webb of Ohio, and her mother was from Connecticut. So, this story can not be true (and Pres. Hayes married only once).
There is, or might be, a connection with a man by the name of Sir Christopher Packe ,or Pack, 1593?-1682. Sir Christopher was not a member of the Long Parliament (1640-1648); however, he was a member of Oliver Cromwell's "2nd Protectorate Parliament".
Sir Christopher was the son of Thomas Packe of Northhamptonshire. He was a wealthy man who over time procured the position of "Alderman and Lord Mayor" of London (in 1654, wikipedia). He was an ardent supporter of Oliver Cromwell (Cromwell and his ilk dethroned King Charles I, and had him beheaded).
Cromwell knighted Pack and in 1655 Pack became a Member of Parliament, and a member of the "New House of Lords". Pack later introduced a proposal to make Cromwell a King; however, the proposal failed.
Once the monarchy was restored under Charles II, the King offered pardons to Cromwell's followers; however, a group of a dozen or more were blacklisted from this pardon (Pack was one of them). He was barred from ever holding public office, and, ostensibly, lost his knighthood. He retired to his home, Prestwold Hall, in Leicestershire (pronounced Lestershire in British English). He had two sons: Christopher and Simon; daughters: Anne, Mary, and Susanna.
A book published in 1853 (see above), notes several prominent Packs: Sir Dennis Pack, a descendent of Simon, son of Christopher, was a commander of the light division of Duke Wellington's army (during the early 1800's)
At this point, I can not find the connection between the Packs who descend from Sir Christopher and Samuel Pack (forefather to Packs of Southern WV) who was born in Augusta Co, VA in 1760. Members on Ancestry.com state that Samuel Pack descended from Graves Pack (1680-1723), the son of Dennis Pack. But, this could not be the same Dennis Pack who descended from Sir Christopher (there is a difference of about 100 years). Also, many sources offer up stuff like "Alderman Pack was the son of Sir Christopher" and was a member of Parliament, and that Sir Christopher was the son of Major Dennis Pack. Alderman is a title of office, Christopher's son was not a member of Parliament (he was), and Dennis Pack was a descendant (not his father).*
*Note: For a further look into the distant ancestors of the Packs, check out the above mentioned resources. Also, take a look at the recently published book: A Cornucopia of Packs, by Jeffrey Pack, Woodfield Publishing (I have not read this book yet).
Samuel Pack (1760-1833) I have covered this in previous posts. Samuel Pack moved to the Bluestone River area. He was involved in a number of skirmishes with Indians. He married Mary Farley (daughter of Captain Matthew Farley). He owned a large stretch of land from the mouth of the Greenbrier to Warford. Children: John, Samuel, Bartley, Lowe, William, Matthew, Anderson, Betsy, Polly, and Jennie.
His son John R Pack (born 1807)first married Elizabeth Harvey (daughter of Joshua and Sally Swope Harvey). They lived in Streeter. He built the historic Pack's Mill (photo in earlier post). Children: William, Sarah, Mary Jane (who I descend from), James, John, Rachel, Nancy, Samuel, and Preston. John R's 2nd marriage to Betsey Rollyson: Albert, Tom, and Haley.
Samuel Pack was born at Streeter and took over operations of Pack's Mill. He married Rhoda Anne Farmer Cooper (the church at Streeter is named in her honor) she was the daughter of Alexander and Mary Ann Farmer Cooper. Children: Lucy, George, Andrew, William Alex, Alfred Berman, Laura, Amanda, Samuel John Tilden, Jediah, Cecil, and Effie.
Samuel John Tilden married Margaret Elizabeth Henderson, daughter of William Henderson and Sarah Ann Lilly Dunbar. They lived at Streeter. Children: Clara (married Carl Hatcher), Winnie (m: Jamie Lilly), Audra (m: Opal Pack), Marie (m: Earl Lilly), Bessie (m: Wade Harvey, then Robert Wadell), Dewey (m: Alma
Posted by Brian.... at 11:02 AM 13 comments: 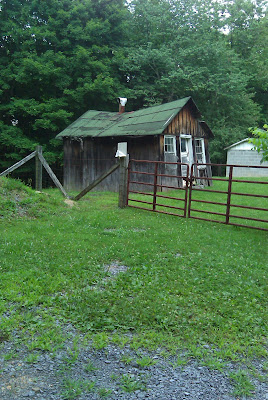 Streeter Post Office located on land owned by the Pack Family (NE of Pack/Vest cemetery on Streeter Road).
The post office closed in the 1980's.
Posted by Brian.... at 11:29 AM 3 comments: